Posted by weblogger at 9:49 PM No comments:

Email ThisBlogThis!Share to TwitterShare to FacebookShare to Pinterest
Labels: Vehicle

What developers say and what they really mean 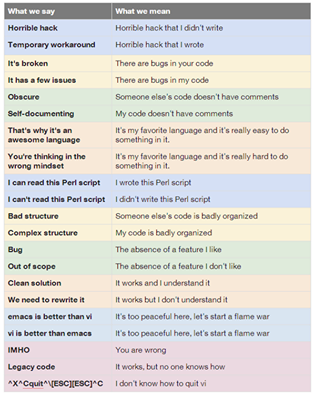 Posted by weblogger at 9:45 PM No comments:

What not to say to someone with cancer

IMAGE: DR KERRI PARNELL RECOMMENDS SHOWING LOVE AND AFFECTION TO FRIENDS AND FAMILY RECENTLY DIAGNOSED WITH CANCER.(TINO SORIANO/ GETTY)
When someone in your life has been diagnosed with cancer it can be difficult to know what to say. Do you talk about your aunt's experience with the disease? Or distract them with a cat video? Dr Kerri Parnell, who's living with cancer, has a few surprising tips for the inevitably sad and potentially awkward conversation.
'Everyone is coming from a good place when they're talking to someone who's got cancer,' says Dr Kerri Parnell, a general practitioner based in Sydney. 'No one's trying to make someone feel uncomfortable.'
But sometimes, people just can't get it right. Amidst over-compensating, trying to be helpful and feeling nervous, friends and family can end up making everyone feel worse.

If there was some miraculous cure my oncologist would probably be the one to tell me about it, so maybe don’t suggest how I can cure myself.
DR KERRI PARNELL

Parnell has had many such conversations. She was diagnosed with metastatic cancer in 2007. The cancer had spread from an undiagnosed tumour in her breast. Parnell underwent a mastectomy, chemotherapy and radiation. Eight years on, she is still battling with the disease. 'This has been a tricky year,' she says.
One of her oncologists described metastatic breast cancer as crossing a river with stepping stones, with each stone representing a different treatment.
'At some stage, you're probably going to run out of stepping stones,' she says. 'Hopefully, there are going to be more and more stones invented as time goes on.'
Here, Parnell gives a few tips on what people should—and should not say—to those diagnosed with cancer.
What not to say:

Don't mention your cancer story.
If your mother-in-law or aunt was diagnosed with cancer, 'I don't really need to know,' says Parnell. 'It's simply not helpful... Even if it's a good story, I don't want to spend most of my time talking about cancer.'

Don't say 'How are you?'
Obviously, it's fine to ask someone how they are. But if the answer is 'I'm fine', don't proceed to look someone in the eye, grab them by the arm and repeat the question: 'No, really, how are you?'
According to Parnell, it's best to follow the person's lead. If they're not openly engaging in a discussion about their cancer, don't push. 'I think if people want to talk about it, they'll talk about it,' she says.

Don't say 'I'm really tired too'.
When Parnell is asked how she's feeling, sometimes she might reply, 'Look, I'm a bit tired'. A common response? 'Yeah, I'm really tired too'. But, of course, it's not the same tired.
'You're probably not on 17 pills a day, and you probably didn't wake up all night with hot flushes from the medication,' she says. 'They're trying to be empathic, but it's actually distancing.'

Don't recommend 'the carrot juice extract cure'. Or any miracle cures.
'If there was some miraculous cure, my oncologist would probably be the one to tell me about it, so maybe don't suggest how I can cure myself,' says Parnell.

Don't say 'You must stay positive'.
Parnell says here's no evidence that staying positive can cure cancer: 'It's a myth.' Meanwhile, telling someone to stay positive can make them feel guilty for not feeling upbeat while struggling with a disease.

What you should say:

Do say 'You're loved'.
'We all want to be loved,' says Parnell. She recommends showing any expression of love and support to someone diagnosed with cancer. 'Anything that might decrease that distance, rather than increase it,' she says.

Do say 'Are you free for dinner?'
Parnell says people with a chronic illness often want 'some distraction and discussion'.

Do say 'You are strong' (where appropriate).
For Parnell, when people genuinely tell her that she's strong, it makes her feel that way.
'Often when you've got cancer you don't feel strong, you feel vulnerable and fragile,' she says. 'Anything that makes you feel strong is one of the best feelings.'

The take-home message, says Parnell, is to follow your friend's lead. If they're not talking about cancer, then you probably shouldn't either.
Posted by weblogger at 9:37 PM No comments:

Email ThisBlogThis!Share to TwitterShare to FacebookShare to Pinterest
Labels: Health

The RV for the end of the world

18-tonne, $890,000 vehicle that looks ideal for people who like holidaying outdoors - in a warzone

By JULIAN ROBINSON FOR MAILONLINE


Painted in military green, weighing in at 18-tonnes and fitted with a giant set of wheels, this supersized camper van would not look out of place in a warzone.

The massive vehicle, produced in Saalfelden am Steinernen Meer, Austria, has a 720-horsepower engine and comes with a £585,000 price tag.

But despite its tank-like appearance, the Action Mobil Global XRS 7200 - described as a 'motor home for global cruises' - is also built for comfort and comes with 23 sq ft of living space.

Scroll down for video +12
Solid: The Austrian-made camper van is painted in military green, comes with a 720-horsepower engine and costs up to £585,000 +12
Power: The camper van looks more like a military vehicle and is so big it can easily carry a motorbike on the back on a special platform +12
Spacious: The Action Mobil Global XRS 7200 - described as a 'motorhome for global cruises' - is also built for comfort and comes with 23 sq ft of living space +12
Built for comfort: Other amenities prospective owners will get for their money include a washer and dryer and satellite television

Some of the amenities prospective owners will get for their money include satellite television, a washer and dryer, and a lift at the back to carry a motorbike.1
The Austria-based firm offers a variety of two, three, and four-axle vehicles. The company's website says: 'This luxury all-wheel motorhome captivates by its clear-cut lines, optimum functionality for long stays in off-road terrain and exclusive, homely atmosphere – all this in a motorhome for globe cruises.'

Stephan Wirths, managing director of Action Mobil, said that the company have sold around 300 of the mammoth vehicles so far. +12
The massive vehicle, produced in Saalfelden am Steinernen Meer, Austria, has a 720-horsepower engine and comes with a £585,000 price tag +12
Fixtures and fittings: The Global XRS 7200 motorhome has 23 sq ft of living space and comes with a fitted out bathroom and toilet +12
Luxury: The vehicle is fitted out with kitchen amenties including a washer and dryer, oven and sink. The Austria-based firm offers a variety of two, three, and four-axle vehicles
But despite its giant size, the Global XRS 7200 is not the largest vehicle the company have ever sold.
The Desert Challenger - a specially-made model, which weighs 30 tonnes and offers five miles per gallon - was once sold for more than £1million.
Mr Wirths said: 'People always have a great reaction the first time they see it - I like every single feature on the Global XRS 7200.' +12
But despite its giant size, the Global XRS 7200 is not the largest vehicle the company have ever sold. The Desert Challenger - a specially-made model, which weighs 30 tonnes and offers five miles per gallon - was once sold for more than £1million +12
The vehicle, described as a 'motorhome for globe cruise' features comfortable chairs, a fully kitted-out kitchen and bedroom area +12
The camper van comes with a price tag almost three times the average British home with some models costing between £365,000 and £585,000

Posted by weblogger at 9:35 PM No comments:

Email ThisBlogThis!Share to TwitterShare to FacebookShare to Pinterest
Labels: Vehicle

What you need to know about the Haze... 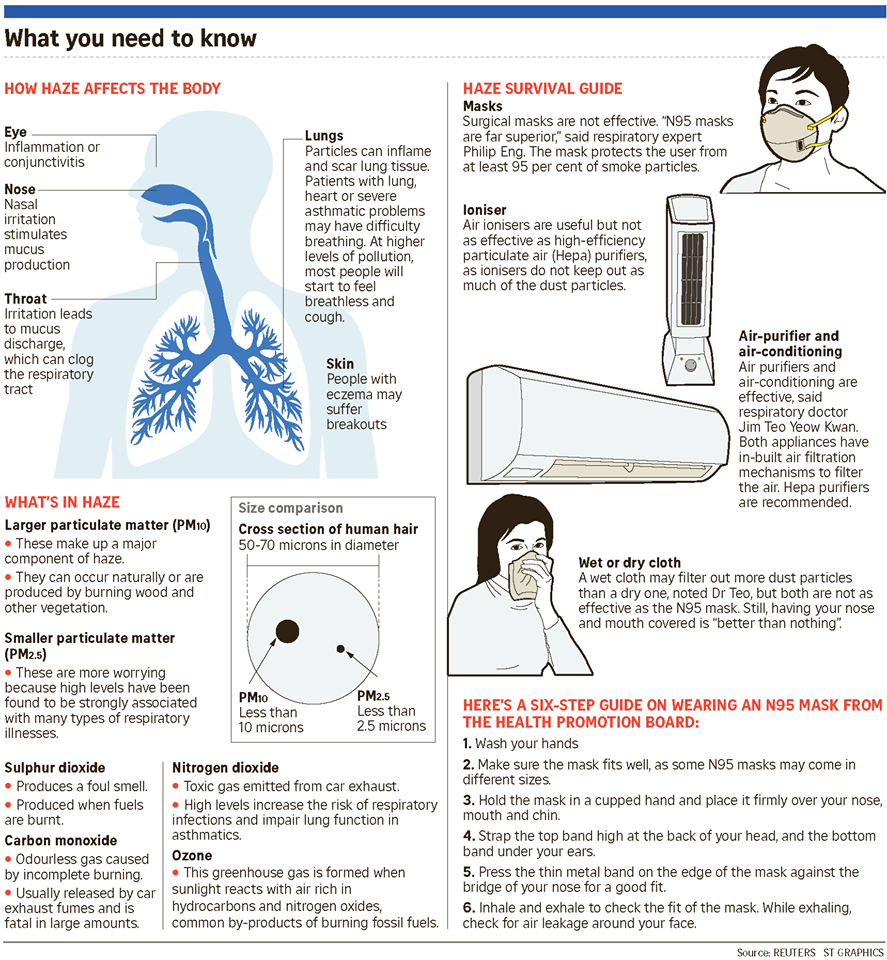 Email ThisBlogThis!Share to TwitterShare to FacebookShare to Pinterest
Labels: Health

The Costs of a USS Enterprise (Infographics)

It didn't include the costs of having replicators, deflector arrays, phasers and not lasers, photon torpedoes, transporter, and most important was that it was quoted for a nuclear reactor and not matter-anti matter. haha. But good enough... 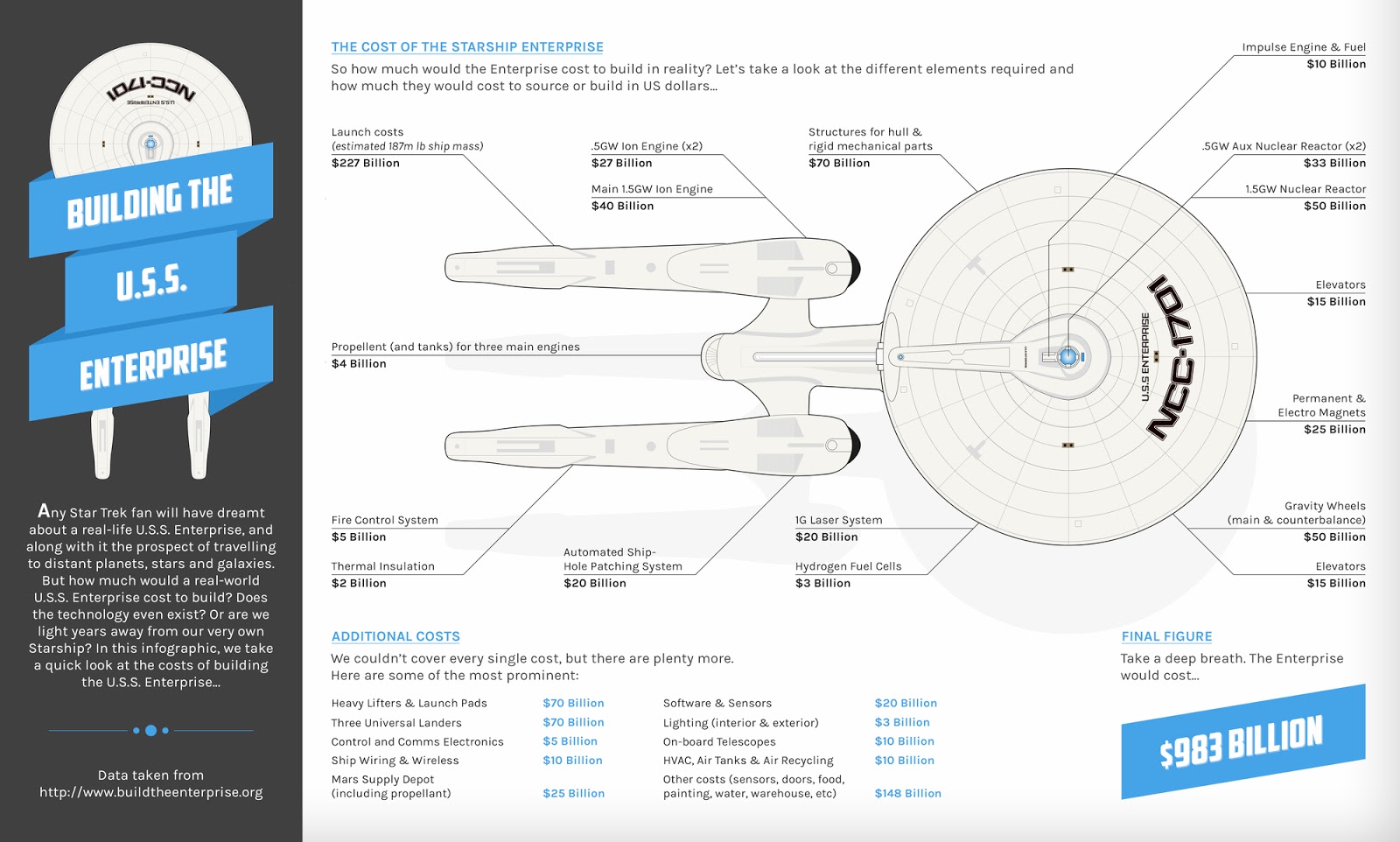 Posted by weblogger at 11:10 PM No comments:

20 Simple Ways You Can Make Yourself Irreplaceable at Work

Posted by weblogger at 9:45 PM No comments:

GE2015: What if the PAP were a person? Here's what IBM Watson has to say

SINGAPORE - Nine political parties are out to woo voters this general election. If each were a person, what would he be like? How adventurous would he be, how assertive, sympathetic or conscientious?
The Straits Times turned to IBM Watson's Personality Insights for a tongue-in-cheek look.
The programme produces a personality analysis by examining language used. It has been employed to dissect the State of the Union address by American presidents, and can also be used to predict behaviour on social media.
It bases its assessments on personality models and text analytics methods developed by psychologists.
It groups its results into five main traits used in standard personality tests - openness, agreeableness, extraversion, conscientiousness and emotional range. Each trait has six facets that further define an individual.
As input, The Straits Times used the text of the eight party political broadcasts in English that were aired on Sept 3.
The People's Power Party was not eligible for the broadcast as it is fielding fewer than six candidates for the Sept 11 election.
What does Watson think of the People's Action Party (PAP), Workers' Party (WP), National Solidarity Party (NSP), Singapore Democratic Party (SDP), Reform Party (RP), Singapore People's Party (SPP), Singaporeans First (SingFirst) and Singapore Democratic Alliance (SDA)?

HERE ARE SOME TAKEAWAYS:

Openness
Measures how open a person is to new experiences. An open person would be more adventurous and willing to experiment. He or she is also likely to be more artistic, and likely to challenge authority.
NSP scores the highest on openness and PAP the lowest.
Watson says that while PAP is very artistic, it adheres to traditional values, and is, unsurprisingly, not ready to challenge authority.
Among the opposition parties, SingFirst scores the highest on being "authority-challenging" and is also the "most adventurous".
Conscientiousness
Measures a person's tendency to act in an organised or thoughtful way. People who score high here are driven, deliberate, organised and self-disciplined.
PAP is the most conscientious, while RP is the least, says Watson.
SPP comes second on this measure, then comes WP.
PAP, competent and disciplined, leads on most of the categories in this measure.
Extraversion
Measures a person's tendency to enjoy the company of others. Those who score on this are energetic, assertive, cheerful and sociable.
SDP is sociable while RP seems to be an introverted sort. SDP scored well on assertiveness and being outgoing. PAP is also rather gregarious and the most cheerful among the parties, Watson says.
Agreeableness
Measures a person's tendency to be compassionate and cooperative towards others. People who score high on this are altruistic, modest, genuine and sympathetic towards others.
PAP is rated the most agreeable, while NSP has the lowest score. NSP is sympathetic towards others, but is uncompromising and not trusting of others, Watson says. In all fairness, however, all parties scored above the average in altruism and empathy.
Emotional Range
Refers to whether a person's emotions are sensitive to his or her environment. Those who score highly tend to be more prone to anger, more anxious, and may be more affected by stress.
All parties had low scores on this measure. SDP came across as the most fiery, while NSP and RP are "mild-tempered". PAP, the conscientious one, also seemed a little more prone to worry and stress.

HERE ARE THREE WORDS TO DESCRIBE THE EIGHT PARTIES, COURTESY OF WATSON:

http://www.straitstimes.com/politics/ge2015-what-if-the-pap-were-a-person-heres-what-ibm-watson-has-to-say
Posted by weblogger at 10:13 PM No comments: