In Layman's Terms, What Are The Major Programming Languages?

PHP is your teenage sweetheart, the girl you first awkwardly fumbled around with that one summer. Just don’t try and start a more serious relationship – this girl has serious issues.
Perl is PHP’s older sister. She might be a bit old for you, but she was pretty popular back in the 90s. She’s looking pretty ugly and scarred now, so you don’t hear from her too much.
Ruby is the cool kid of the scripting family. When you first saw her, she took your breath away with her beauty. She was fun, too. At the time, she seemed a bit slow and ditzy – though she’s matured a lot in the last few years.
Python is Ruby’s sensible (and slightly more boring) sister.
Java is a successful career woman. What she lacks in raw intelligence she makes up for in dress – always turned out in immaculate CamelCase, sure to impress the enterprise customers. You might feel like she’s the sensible type you should settle down with. Just prepare for years of “NO THAT DOESN’T GO THERE GOD YOU ALWAYS USE THE WRONG TYPE AND YOU MISSED A SEMICOLON” nagging.
C++ is Java’s cousin. Similar to Java in many ways, the main difference being she grew up in a more innocent time and doesn’t believe in condoms/automatic memory management, so be cautious.
C is C++’s mom. Mention her name to some old grey beard hackers and they’re sure to reminisce with a twinkle in their eye.
Objective C is another member of the C family. She joined that weird church a while back and won’t date anyone outside of it.
Haskell, Clojure, Scheme and their friends are those hipster, artsy, intellectual girls you probably spent a blissful college summer with a few years ago. The first girls who really challenged you. Of course, it could never have become something more serious (you tell yourself). Though you’ll always be left asking “what if?”
You might be put off C# due to her family’s reputation. But they’ve gone legit, the last few years, they tell you. Once you’re one of us, you’re one of us, you hear? You need a database? Her brother MSSQL will hook you up. Need a place to stay? Heck, her daddy will even buy you your own mansion on Azure avenue. What’s that, you’re having second thoughts about all these overly friendly relatives? No, you can never leave. You’re part of the family, now, ya hear?
Javascript - hey, wasn’t that the girl you first kissed, way before even PHP came on the scene? I wonder what she’s doing now. I hear her career’s really taken off in the last few years. Would be cool to catch up some time, if only for old time’s sake… (You catch sight of her, dressed head to toe in designer jQuery)… wow, somebody grew into a beautiful swan…

Isaac Lewis is the founder of the CTO Network. Follow him athttp://i.saac.me/.
Posted by weblogger at 11:32 PM No comments:

The long awaited Android Ice Cream Sandwich (ICS) 4.0.3 firmware is now available for Huawei U8860 Honor (both camera and non-camera)!

This firmware release is specifically for users in Singapore:

Warning: Do note that this is a wipe rom. It means that it formats /cache , /data and /HWUserData. So do your necessary backups before proceeding with the flashing.
The flashing instructions are included in each of the firmware packages. The ICS ROM flashing requires you to have a microSD card (at least 1GB in size) to store the firmware for upgrade. The upgrade is straight forward but do note (again) that it actually wipes off your user and application data. So do any necessary backups prior to the upgrade.
Posted by weblogger at 6:31 PM No comments:

Star Trek technology: how 21st century scientists are making it so

Many have been inspired by Star Trek to become scientists, and some are starting to make its gadgetry a reality 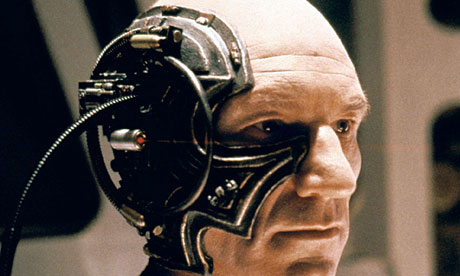 Captain Jean-Luc Picard after assimilation by the Borg in 2366. In 2012, scientists are toying with the possibilities of cybernetics. Photograph: Sportsphoto/Allstar/Cinetext
Destination Star Trek London has kicked off at the ExCeL exhibition centre, and I'm willing to bet that among those heading down for a weekend of pointy-eared fun, there'll be a high proportion of scientists and engineers.
Many have been inspired by Star Trek to take up a career in science, technology or engineering. I think the franchise deserves more respect as a science popularisation medium – how many other prime-time TV shows would allow their characters to toss out phrases like "I performed a Fourier analysis on the harmonics, Captain"?
Since its inception in 1966, Star Trek has familiarised us with the lingo and applications of science. At least, that was the case for me. I felt pretty disenfranchised from science at school: it wasn't until I discovered science fiction that I realised I could understand "difficult" technical concepts.
Since the show began, many of us have become more tech-savvy than we could possibly have imagined at school. More than that, we're now seeing emergent technology here on Earth that was once little more than a Star Trek scriptwriter's dream. To get you in the mood for this weekend's festivities, here's a roundup of some of the best Star Trek-inspired technology.

Who wouldn't want their own replicator? Well, you can have one – of a sort. Three-dimensional printers have been on the open marketcommercially for most of the 21st century. Their basic technology isn't that dissimilar to a standard ink printer: a starter material, such as polymers or resins, is deposited layer by layer, building up to a 3-D shape. You can even print your lunch: over at Cornell's Creative Machines, a 3-D printer can make your food to order.
Brilliant as these devices are, they don't actually create new compounds: it's more a fancy version of your mum's cake piping. But earlier this year, Professor Lee Cronin took the idea to a new level with his prototypeChemputer: a modified 3-D printer with the ability to synthesise inorganic molecules – to date, an organic heterocycle and two inorganic nanoclusters. Ultimately, Cronin envisages the printing of complex pharmaceuticals to order.

Earlier this year, Nature reported that photons had been teleported 89 miles, between La Palma and Tenerife. OK, it wasn't exactly transportation: instead, each photon's state was teleported, via quantum entanglement. In essence, the photon was instantaneously copied and reproduced across the distance, while the original was destroyed. Still, this represented light-speed transmission of information, which could be useful for communications between Earth and space.

The ship's computer aboard USS Voyager incorporated a novel form of 24th century technology – bioneural circuitry, in which neurons perform complex computations in a way similar to brains. In the 21st century, biocomputers may find similar inspiration in an unlikely source — the humble slime mould. Physarum polycephalum is capable of sophisticated spatial computations: calculating the most efficient route through a food network, for example.
And in February of this year, the Scripps Research Institute published details of a DNA-based biological computer based on an original design by Alan Turing.
Like Voyager's bioneural circuitry, contemporary bimolecular computers have the potential to run trillions of steps in parallel, and to store vast quantities of data compared with electronic computers.

Ah, this is a good one. In January, our first real "invisibility cloak" was unveiled at the University of Texas.
This cloaking technology relies on plasmonic metamaterials: composite materials composed of structures smaller than the wavelength of the light striking them, so that light falling upon them is scattered. The resulting interference renders the plasmonic metamaterial – and anything behind or inside it – invisible.

Valiant attempts to create a functional tricorder have been made, notably by Peter Jansen at the University of Arizona. Brilliant as Jansen's work is, it focuses on atmospheric analysis. Where's our medical tricorder?
The answer could lie with diagnosis by smell — analysing the volatile organic compounds our bodies secrete. "There's a growing trend towards patient comfort, and utilisation of noninvasively obtained biomarkers", comments Aadi Malkar at Loughborough University. "It seems well within our reach to make devices like tricorders to selectively monitor a biomarker or a set of biomarkers of a disease."

Those with a fear of needles can be grateful to MIT's Bioinstrumentation Lab, which has constructed this prototype hypospray, in which near-supersonic air is used to get drugs through the skin barrier.
MIT researchers demonstrate the hypospray

In the UK, a team at the University of Southampton is using ultrasound to make cells permeable to drugs, without injection, using a phenomenon called sonoporation. "We've shown that ultrasound can be used for delivering drugs and large molecules into cells in the laboratory," says researcher Dyan Ankrett. "Providing that all the ultrasonic parameters are tightly controlled, the cells remain unharmed. We're ultimately aiming to develop this technology for delivering drugs to patients."

Federation medics frequently make use of microscopic robotic devices called nanites. As do Mark Davis and his team at CalTech. They've constructed a set of nanorobots, with inbuilt chemical sensors, that can silence genes within cancerous cells. Davis's nanorobots target cancer cell receptors. Once inside a cancer cell they break down, releasing gene-silencing siRNA.
Phase 1 clinical trials provide evidence that the nanorobots can silence a gene that makes an essential enzyme called ribonucleotide reductase. Whether this will translate into effective treatment has yet to be seen.

Japanese scientists have created some remarkably human-looking androids, though they wouldn't beat Data in a game of three-dimensional chess. Can existing robots reason and learn, in a way that we would define as "intelligence"? Maybe: Kevin Warwick, Professor of Cybernetics at the University of Reading, has constructed robots with mini-brains made from living rat neurons – "rat-brain robots" that he says can, over time, develop the intelligence of a bee or wasp. Prof. Warwick takes his cybernetics work personally, having previously volunteered to have his nervous system linked to a computer via a surgically implanted "brain gate". This probably gives him more in common with Seven of Nine than with anything Dr Soong created.
So it seems 21st century science is slowly but surely catching up with Star Trek. Live long and prosper, old friends.