iOS vs Android 3.0 vs webOS: which is the best tablet OS?

In Depth: We've used all three, time to slug it out 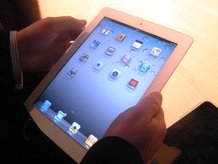 We've already pitched iOS vs Android vs webOS vs MeeGo on TechRadar, but that was purely on the specs and and experience of earlier versions. We've now used and evaluated all the three main tablet OS options.


And although we won't have Windows on a tablet quite yet, the battle between the tablet operating systems is set to hot up over the next few months as iOS 4.3 emerges with the iPad 2 and we see the plethora of Android 3.0 Honeycomb devices hit the streets with the Motorola Xoom, Samsung Galaxy Tab 10.1 and others.
We've also used the interesting HP TouchPad which uses webOS 3.0. It's a very good user interface – but can it have broad appeal? Read on to find out.

Why isn't the BlackBerry PlayBook OS here? Because we've used release versions of all the other operating systems. The version of the BlackBerry Tablet OS that we've used isn't final – the Android apps integration wasn't there, for example.

iOS vs Android 3.0 Honeycomb vs webOS: interface
iOS is a brilliant OS. iOS is cleanly-designed, fluid, incredibly intuitive and, what's more, it has plenty of cool features – it just works very well, whether you're using an iPhone 4, iPod touch or iPad. The interface is exceedingly easy to use, even for those who haven't touched an iOS device before.
WebOS is surprisingly nippy and feels better designed than Android 2.2/2.3. Different apps and screens run in different 'cards' which you can flick around the interface and it feels very pleasant to use. Apps are launched by tapping icons on the pull-out 'Launcher' screen. We like it a lot, although it does take a bit of getting used to.

Android is also an extremely capable OS. It's reasonably easy to use and it's been helped by being implemented in some cracking mobile phones. The trouble is that putting Android 2.x in tablets has been beset by problems, mostly because – as Google said all along - Android 2.x wasn't intended for tablets.

iOS 4.3: Offers better performance for browsing, here on the iPad 2


Android 3.0, codenamed Honeycomb, will fix everything and is so, so different. It's a brilliantly fluid tablet OS, easy to use and is slick with a 3D interface. It does, however, seem a bit techy in some areas – like the smartphone version of the OS it's not always as straightforward for the uninitiated as iOS. We think it also has an issue with fragmentation. Somebody who has used an HTC Desire won't automatically be at home with Honeycomb.

iOS vs webOS vs Android 3.0 Honeycomb: customisation
When it comes to customisation Android is the clear standout winner. You're able to customise a lot more of the interface than in iOS – in which you can only really customise the app layout, put apps in folders and change the backgrounds.

WEBOS: A clean and very usable interface is the best aspect of HP's webOS

webOS is even less customisable - you can choose what icons appear in the Launcher and change the wallpaper, but there are no folders for easy app-grouping. There are no widgets, but there is a notification system that tells you about the latest updates.


The notifications in Android 3.0 have also been beefed up. You can customise the wallpaper and rearrange or prioritise the onscreen app icons. However, Android's best facet is its use of widgets, so you can see everything you need to know at-a-glance without having to open and close apps as in iOS.

iOS vs Android 3.0 Honeycomb vs webOS: web browsing and email
Android, iOS and webOS all support the WebKit rendering engine within their browsers, delivering a fluid and fast internet experience – Safari has also had some speed improvements implemented in the new iOS 4.3. Of course, the main difference between the iOS web experience and that of other operating systems is the lack of support for Flash.

However, Flash isn't ready for Android 3.0 yet, although it is expected to be quite soon. All three operating systems do support HTML5 though, so you will have no problem with content.

WEBOS: Offers integrated messaging on the HP TouchPad
In terms of email, all three support unified inboxes, with support for Microsoft Exchange email and threaded messaging. We like the simple approach that iOS brings to email, but we have to say that the webOS cards interface is especially suited to email, since you can flip back and forth between a web page and a new email easily. However, copy and paste in iOS leads the pack, so the need to do this should be a rarity.

iOS vs Android 3.0 vs webOS: performance and multitasking
HP's webOS offered multi-tasking from its launch inside the Palm Pre, although initial performance was patchy and it wasn't until the Palm Pre 2 that things were rectified. With the HP TouchPad and HP Palm Pre 3 though, the multitasking is extremely slick and seamless. Android is also pretty handy at fast app switching. As for iOS, well, it works but it isn't perfect. Suspending the app in the background does work to a certain extent, but it's having music in the background from an app like Spotify where the multitasking takes off.

However, it's not clear what apps are suspended and what isn't – a sat nav app, for example, will continue chewing up resources by continuing to run in the background in some cases – you have to be pretty canny to shut it down.


Third-party apps can have debilitating effects in Android, too. In terms of performance, all three operating systems run extremely well on current hardware. We just hope that Apple has learnt from its iOS 4 performance issues on the iPhone 3G. At a time when many were thinking whether to jump to Android or to the iPhone 4, releasing an unbearably slow software update wasn't exactly a great move by Apple.

iOS vs Android 3.0 Honeycomb vs webOS: app stores
There's no contest when it comes to comparing app stores. iOS wins outright in terms of numbers and quality of apps – there are over 400,000 available, however it is a closed market. Android has passed the 200,000 app marker, but quality can sometimes be questionable. Android Market has recently been vastly improved by offering a web-based version of the Market that enables one-click download on to your device.

The new Android Market is actually better than the Apple model where you need to visit iTunes on your desktop or the App Store on your device. Anybody can make apps for Android and webOS and you can install applications outside their official marketplaces. The webOS App Catalog currently has a few thousand official apps available for download.

iOS vs Android 3.0 Honeycomb vs webOS: updates
Few would argue that Android has made the biggest strides forward with its updates since it first launched. It's easy to forget that the original 1.1 release didn't have features like video recording, turn-by-turn navigation, widgets, tethering or Wi-Fi hotspot functionality and Android 3.0 will take this on a notch.

But the pace of Android development has left the market fragmented - some devices run 1.6, others 2.1 or 2.2. New Android updates are often delayed for the majority of users. Not because Google is slow to release them, but because smartphone manufacturers have enhanced Google's software with their own UI tweaks and so need to recode and retest them. HTC customises Android with the Sense UI; Samsung modifies it with TouchWiz; while Motorola bakes in MotoBlur.

OPTIMUS PAD: The interface of Honeycomb is wonderfully smooth

Only the two Nexus devices have featured a 'pure' version of Google's software. Like Palm and now HP with webOS, Apple also updates iOS on a regular basis. Like HP, Apple retains full control by rolling out the update itself rather than through partners. The iOS 4.3 release date is Friday and it will bring mobile Wi-Fi hotspot access, fixes to AirPlay and faster browsing.

So, which do we like most?
Much as it's not a very helpful conclusion, we like all three of these operating systems. They're all tremendous for tablets. However, we think it will be fairly easy to separate them out and find which is best for you.

If you already have an iPhone, you'll almost love iOS on a tablet. And if you've already used an iPad it's likely there will be no other tablet OS for you. However, Android 3.0 and webOS are both brilliant operating systems and, if you don't want an iPad there are lots of great hardware choices.

The HP TouchPad is an interesting option but it's more likely to be used as a business tablet like the BlackBerry PlayBook. However, the Motorola Xoom, Samsung Galaxy Tab 10.1 and LG Optimus Pad are stunning Android 3.0 tablets running a truly great operating system

WEBOS: The 'cards' interface is great to use
Read more: http://www.techradar.com/news/mobile-computing/ios-vs-android-3-0-vs-webos-which-is-the-best-tablet-os--933978#ixzz1JPYMkjLw
Posted by weblogger at 9:55 PM