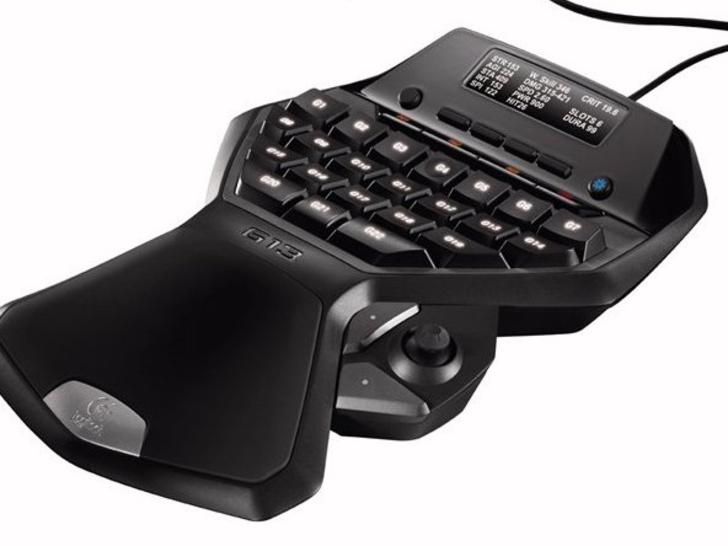 Logitech has unveiled the first peripheral of its latest gaming range with the G13 Gameboard aiming to put a brand new spin on an old concept and lure gamers away from their keyboards.

Nostromo had some success with their SpeedPads, but Logitech's latest game pad is aiming to bring its customary flair to the peripheral and not only catch the attention of hardcore gamers but also the World of Warcraft addicts that are proliferating across the globe.

The G13 Gameboard certainly doesn't lack the necessary aesthetic and it curves gracefully to minimise stress on the wrist â€“ one of the pad's largest selling points. The keys mimic the left side of the keyboard but with the added advantage of a mini-joystick for the left thumb.

This joystick is a key factor in the Logitech G13 Gameboard's appeal quite simply the thumb is far more useful when its dexterity can be used rather than wasted on simply the space bar.

The extra movement allows gamers to put key actions at the swivel of the thumb potentially much faster than having to move a finger to another key. It's an incredibly effective idea although it takes some time to get used to.

The only complaint you are likely to have about this mini-joystick is that it feels a little flat. By the end of our extensive testing session I was still feeling like I was straining to move the joystick right but it's a minor quibble.

The keys are excellent arranged in a shallow concave curve that never feels uncomfortable or strange. Years of first person shooters on a keyboard may have given us tendons of steel, but the Logitech G13 certainly doesn't take a lot of adjusting to.

To be fair, Logitech in their wisdom had pre-configured the G13 Gameboard for the games that we had the chance to test the peripheral on, but being naturally difficult I immediately switched things round and found tinkering with things to move 'jump' away from my thumb quick and easy.

The keyboard can be flicked into three separate modes essentially meaning that you can programme each key with three separate tasks and you can flit in and out of whichever mode suits so a different colour can be assigned to each different function set.

So for something like World of Warcraft you can have different control sets depending on what you are doing.

This is aided by the fact that the G13 Gameboard can be programmed for macros which can be recorded on the fly allowing you to loop common functions and create custom combinations that should lighten the load on your fingertips. Grinding may never be so fun.

Now macros are nothing new but another neat trick that links all of the above together is that you can store this configuration on the device itself allowing you to take the peripheral, and your mass of macros/key configurations and profiles with you wherever you go.

Of course, one of the gamer's traditional bugbears is having to run third-party software for their devices with many simply taking advantage of plug and play and not letting the drivers CD near their box but memory usage doesn't seem outrageously high, even with the programme running.

That memory usage is ramped up a little by the novel 160x43 monochrome LCD screen which can impart gaming information like health and ammo as well as other communications.

It's an idea ported directly from Logitech's gaming keyboards and opinion is split as to whether it is a brilliant tool or a memory hogging white elephant.

For me it's not likely to become part of my everyday gaming, but it does add a little wow factor to an already impressive piece of kit.