Skype is set to launch its iPhone application today, bringing its much-anticipated Net-based phone service to Apple's mobile platform. With the Skype iPhone app, users will be able to make free calls using Wi-Fi to other Skype users as well as use their Skype accounts to make reduced price calls to traditional landline phones. Skype announced its iPhone application will be available for free, with a version for the BlackBerry available in May. Mobile versions of Skype are already available for Nokia, Windows Mobile, and Google Android phones.

From what we can tell, the Skype for iPhone looks great; but it has some drawbacks. One disappointment is that users won't be able to place calls over cellular networks, but only via Wi-Fi. Still, for international callers especially, Skype's iPhone app will save callers money by allowing them to avoid AT&T's traditional wireless phone network and adds the convenience of allowing Skype users to use their iPhone handset for Skype calls.

Looking more like a traditional iPhone app rather than the desktop Windows counterpart most of its 400 million users are used to, Skype for iPhone features five tabs at the bottom of the screen, displaying contacts, chats, a calling panel, call history, and your profile (with Facebook-style status).

Skype for iPhone will use phone numbers directly from your phone's address book, so no more nasty duplicated contact lists. It even displays your contacts' photos (if they have one set up on Skype). Conference calling is available, but for the moment you can only take part in one if someone invites you.

You can also chat with your Skype friends, but unfortunately this is the only thing (besides seeing who's online) you can do over a cellular network. Skype for iPhone places calls only via Wi-Fi, not differentiating itself much from the other voice apps in the App Store (Skype for T-Mobile G1 can place calls over 3G).

Skype for iPhone is still a young app and is short on some of the features its desktop counterpart has. SMS, video and proper conference calling, file transfer, and voicemail are missing from this first version, but let's hope they will make their way in future versions.

iPod Touch users will also be able toenjoy Skype, but this would require them to purchase a microphone, or headphones with built-in microphones (like the iPhone's).

Posted by weblogger at 11:16 PM No comments:

Finally found them at the Golf House at Takashimaya. It was selling at SGD $6.90 as it was on sale. The original price was SGD $9.90. Will definitely be using them for my next game.

See the review here.
Posted by weblogger at 3:36 PM No comments:

Email ThisBlogThis!Share to TwitterShare to FacebookShare to Pinterest
Labels: Golfing 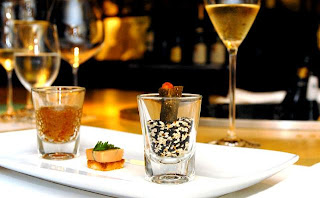 Singaporean restaurateur and sommelier Ignatius Chan’s eponymous four-year-old restaurant has consistently received rave reviews both locally and internationally since it first opened in September 2004. While he doesn’t cook, Chan supervises the culinary direction of the kitchen in close collaboration with his young head chef, Sufian Zain.

At Iggy’s, exceptional seasonal ingredients (their chargrilled Australian Blackmore Wagyu is not to be missed) are showcased and flavours reflecting Chan’s gustatory passions have expanded and diversified with his extensive travels. Zain’s stint in San Sebastian under the tutelage of Elena Arzak at Restaurant Arzak has added a playful hint of molecular gastronomy to the menu without turning it into a cheesy gimmick. Given that Chan is also an award-winning sommelier, wine is an integral part of the Iggy’s experience. Explore the restaurant’s impressive wine list or dip into their changing selection of wines by the glass. Reservations at Iggy’s are highly recommended.